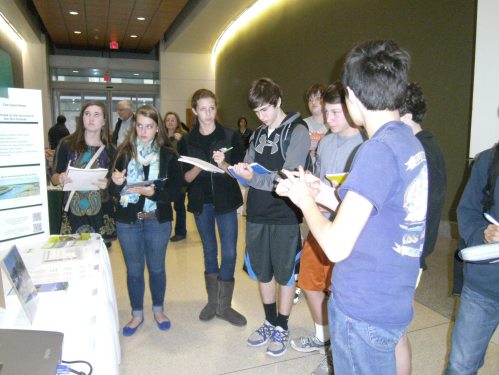 The UT Austin Environmental Science Institute (ESI) has a great Hot Science – Cool Talks series that brings scientists from UT Austin and across the country to talk about their neat science research. Kids of all ages are invited to attend.

Mr. Geoff Hensgen, ESI Outreach Coordinator, invited me to bring my Invasive Hunter Academy to their most recent event with Dr. Jay Famiglietti, “Last Call at the Oasis: Will There be Enough Water for the 21st Century?”

I was excited to, but I wanted to add more information for high school students, since I knew they enjoyed coming to the Hot Science presentations. So I researched about some of the water problems caused by invasive species.

I really liked the new info that I added to the Invasive Hunter Academy. I still have the three fun original steps to becoming an invasive hunter:

For Dr. Famiglietti’s Cool Talks event, I created a new presentation for young adults with some great information about my nemesis, the Giant Reed. I talked about: 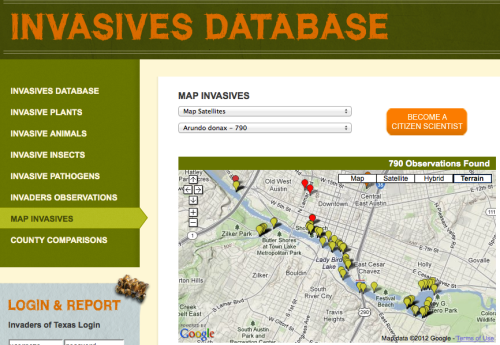 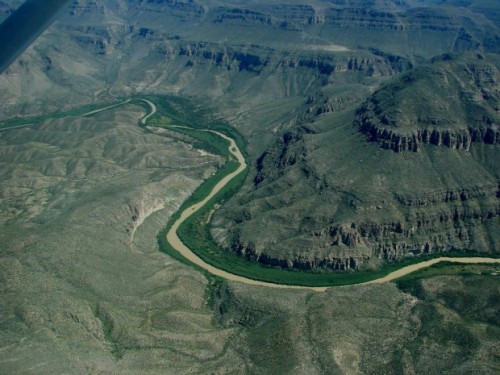 (2) The EPA is considering using the Giant Reed for biofuel because it grows fast and doesn’t impact the food industry. That’s great for a biofuel plant, but the Giant Reed can easily escape into the native ecosystem and take over as an invasive species.

Scientists are concerned that the spread of the Giant Reed to could create an economic and environmental disaster, and for that reason it should not be used as a biofuel.

(3) Especially for Dr. Famiglietti’s freshwater talk, I added information about how the Giant Reed is a threat to the survival of the Rio Grande River because it:

I added QR codes to make it easier for people to access the websites that I talk about in my poster presentation. I first added QR codes when I brought the academy to the Wildflower Center as part of Nature Nights this summer.

I saw people use their iPhones and Android phones to scan the QR codes to access my website, so I wanted to add more codes for my Hot Science presentation to help bring people to where they could get more information on the web, like to learn more about the Giant Reed. 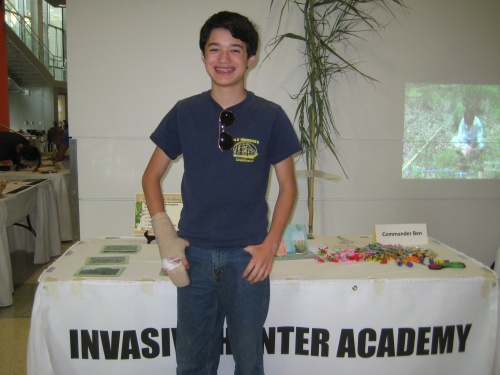 The audience was older than my other academy presentations. There were many students from eighth graders to high school and college students. That was neat!

I enjoy bringing the original academy activities to kids all ages, but now I especially enjoy talking to the older students and teaching them about invasive species. (In these pictures, I still have my hand in a cast from when it got broken during a taekwondo sparring match. :-() 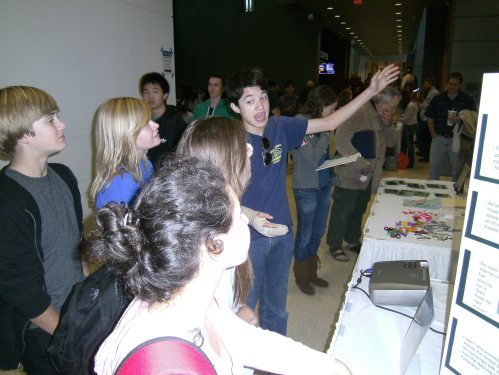 They found my posters very helpful, because a lot of students were there with their science classes, and they had notebooks that they were writing in for extra credit. I talked with them about the problems with the Giant Reed, and they took copious notes. I hope they all got great grades! 🙂 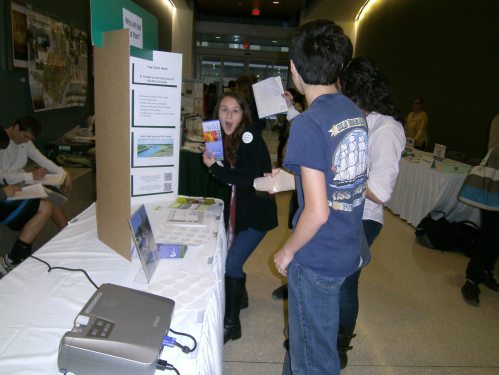 They really liked my “I’m an invasive hunter'” stickers and went to my website on their phones to watch my videos too. They put the stickers on their shirts and books, and one of the high school freshman put it on his forehead. (Not recommended.) 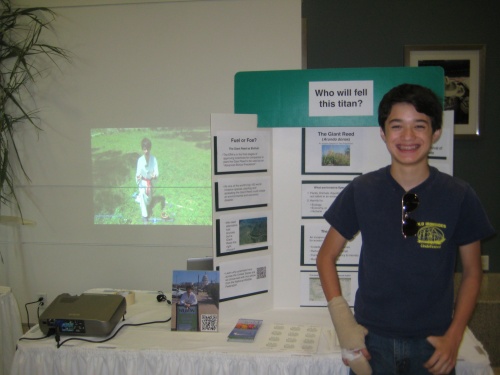 Mr. Hensgen is just the best! I want to thank him for inviting me to be part of the prelecture fun and the interview with Dr. Famiglietti. He gave me the best table because it was near the entrance to the auditorium, and he gave me a projector to play my Battles with Invasive Species videos on the wall during the event.

During the event, I played two videos:

One Freshman high school girl came back another time for two reasons: she was interested to learn more about invasive species and she had also left her iPod. 🙂

It was also great to talk again with Dr. Jay Banner, Director of the UT Austin Environmental Science Institute. I saw him being filmed for the Longhorn Network during the event. Thanks, Dr. Banner, for mentioning me during your prelecture slides!

Last Call at the Oasis 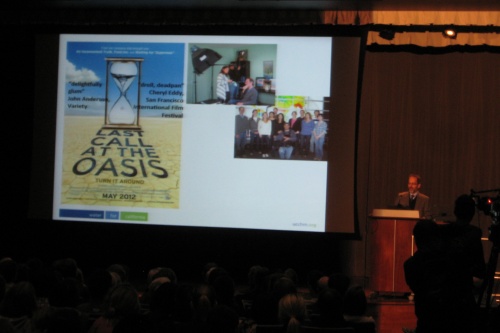 I also had a great time chatting with Dr. Famiglietti before his talk. I wished him good luck, but he didn’t need it because he did a great job!

I found one of the reserved chairs in the auditorium. (Thanks Mr. Hensgen!) and I noticed that they were much, much more comfortable than the regular chairs. (They were the same as the other chairs, but since they were reserved, they were extra comfy!)

Dr. Famiglietti talked about the making of his video, Last Call at the Oasis. It was released on DVD on November 8th, so be sure to check it out!

At the end of his talk, he showed a funny video with Jack Black about their drinkable, treated sewage water, porcelain springs. 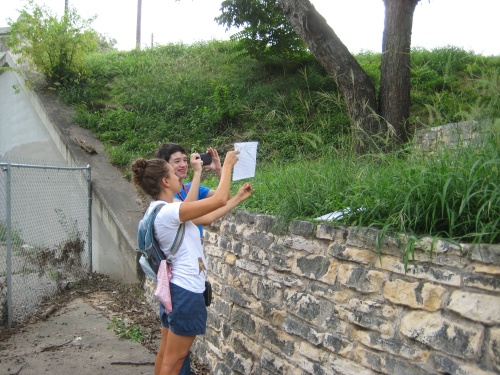 My thanks to Ms. Jessica Strickland for all her help teaching me more about invasive species on the Texas Invasives website and at SXSW Eco. (I learned about the EPA considering to use the Giant Reed as biofuel from the Texas Invasives iWire newsletter. If you don’t already receive this monthly email newsletter, be sure to subscribe to iWire today.) I also learned about the Rio Grande River’s problem with the Giant Reed from presentations during the 2011 Texas Invasive Plant and Pest Conference.

I also want to thank Ms. Alice Nance, Lady Bird Johnson Wildflower Center Education Manager. She gave me a lot of goodies to pass out during the prelecture fun. I had Wildflower Center brochures with discount coupons and Plant Hero badges and certificates. (Kids had a lot of fun with Plant Heroes too when I brought the Invasive Hunter Academy to Nature Nights at the Wildflower Center this summer.) 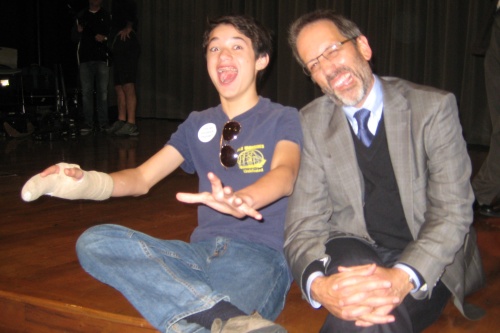 Thank you again Dr. Banner, Mr. Hensgen, and Dr. Famiglietti for everything! 🙂 If you missed the event, watch my video interview series with Dr. Famiglietti and check out the webcast replay of Dr Famiglietti’s presentation. (It was ESI’s 80th Hot Science – Cool Talks event!)

I had a fantastic time, and I can’t wait until the next Hot Science – Cool Talks event on November 30, “The War on Cancer: 41 Years after Nixon’s Declaration“, with Dr. Mark Clanton.

I had a great opportunity to talk with Dr. Jay Famiglietti about the water concerns that we face across the United States, about his work with the GRACE satellite mission, and about the 2012 film featuring him, Last Call at the Oasis. (It’s coming out tomorrow, November 6, 2012, on DVD and BlueRay!)

Dr. Famiglietti visited UT Austin on October 26, 2012, to give his “Last Call at the Oasis: Will There be Enough Water for the 21st Century?” talk as part of the awesome Hot Science – Cool Talks series, presented by the UT Austin Environmental Science Institute. Dr. Famiglietti is a Professor of Hydrology with the Earth System Sciences Department at the University of California – Irvine.

I published my video interview with Dr. Famiglietti in five parts with cool graphics from NASA and the United States Geological Survey (USGS). Click on the videos below to learn more about our water crisis that we face and ways that we, especially kids, can conserve water.

(1) Why the GRACE satellite mission is so cool

The GRACE (Gravity Recovery and Climate Experiment) satellites launched in March 2002. Learn about the valuable data these twin satellites provide along with insight that hydrologic modeling brings with Dr. Famiglietti.

(2) Dramatic Water Depletion in California and the United States

California’s Central Valley and the High Plains Aquifer in the central United States show high rates of water depletion. Dr. Jay Famiglietti talks about these areas of concern and ways that we could improve measuring our water supply.

If we found a way to have unlimited fresh water, would there be a population boom?What technological breakthrough do we need to transform sea water to fresh water easily and affordably? Learn about the water, energy, and food nexus with Dr. Famiglietti.

Saving water begins with becoming aware of your water use. Learn about Dr. Famiglietti’s easy tips to help kids save water. You’ll find that saving energy also helps save water too.

(5) Last Call at the Oasis with Dr. Jay Famiglietti

Dr. Famiglietti talks about the declining snowfall on the Sierra Nevada Mountains and the DVD and BlueRay release of his “Last Call at the Oasis” movie. You’ll also be surprised to learn about his favorite water sport.

My injured hand from taekwondo sparring has slowed me down 😦 , but I’m almost done with my post about the great time that I had during the Dr. Famiglietti’s Hot Science – Cool Talks event and the prelecture fun! 🙂

Thanks for the great interview, Dr. Famiglietti, and my wonderful thanks too to Dr. Jay Banner, Director of the UT Austin Environmental Science Institute (ESI); and Mr. Geoff Hensgen, ESI Outreach Coordinator, for the time to talk with Dr. Famiglietti!