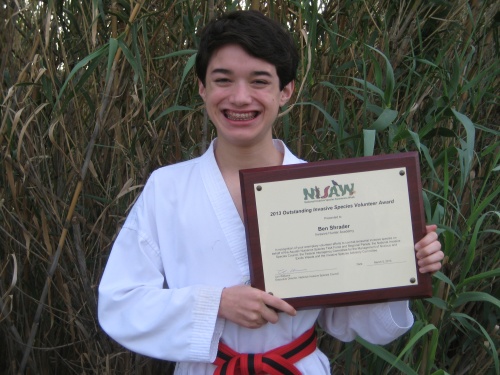 The NISC was created in 1999 and is co-chaired by the U.S. Secretaries of Interior, Agriculture, and Commerce.  NISC provides coordination of federal invasive species actions and works with other federal and non-federal groups to address invasive species issues at the national level.

I am so honored to receive this award but it wouldn’t have been possible without the support of so many fantastic people:

Many thanks to everyone!

Unfortunately, the budget problems in Washington DC and the government sequester, cancelled the formal awards banquet that was part of the 2013 National Invasive Species Awareness Week (NISAW) activities, but here’s what Ms. Lori Faeth, the Deputy Assistant Secretary for Policy and International Affairs at the Department of the Interior, was going to say about my 2013 Outstanding Terrestrial Invasive Species Volunteer Award:

Thanks Ms. Faeth for your kind words!

What’s next in the fight against invasives?