Yesterday, was the final day for the 4th Annual “Lights. Camera. Help.” Focus on Good Film Festival. And all I can say is WOW! What an experience.

The afternoon started at the Scottish Rite Theater with an address by the festival’s keynote speaker Turk Pipkin, founder of The Nobelity Project. This project focuses on two things:

I really enjoyed his talk.

Let There Be Sight

One of the Nobelity Project’s films was “Let Their Be Sight”, a joint project with The SEVA Foundation – Compassion in Action, that provides eye care, including eye surgeries, to people living in rural areas of Nepal. Many of the program’s participants were blind and their sight was restored through cataract surgery.  It was amazing to see a Nepali woman, who had to be carried through the mountains to see the eye doctor. After the cataract operation, she was able to see and walk home!

Another cause highlighted by the Nobelity Project was 1000 Books for Hope which provides donated books to children in Kenya. This project asks people to donate just one book…their favorite book. So why one book? Well, when they asked folks to simply donate “books”, they received a lot of junk that no one wanted. One example was How to Build a Swimming Pool! Not a much needed topic in Kenya where the luxury of being able to ever build a swimming pool is highly unlikely!

But once the project focused on asking people to donate just one favorite book, lots of wonderful books came pouring in.  What was particularly nice about this project is that all the donated books contain an inscription from the donor to the kids. Mr. Pipkin said that this is the first thing the kids rush to read.

And what about our own backyard? Well, the Nobelity Project has partnered with none other than one of my favorite organizations, The Lady Bird Johnson Wildflower Center, to replant the pine trees in Bastrop State Park that were destroyed in last year’s Texas wildfires. And these aren’t just any ordinary pine trees, these are a species only found in the Bastrop area. Luckily, even though almost all of the trees were destroyed in the fire, there were seeds stored in a seed bank that they are using for replanting.

The Last Day of Films

After the keynote address, we all headed over to the Spirit of Texas Theater at the Bob Bullock State History Museum to watch a number of great uplifting films, including Stay: Migration and poverty in rural Mexico. This was an amazing film benefiting Bread for the World. 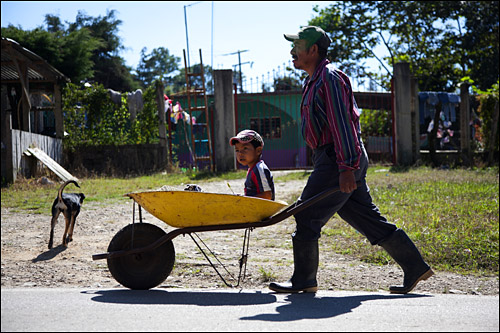 Stay: Migration and Poverty in Rural Mexico
Photo credit: Bread for the World

After the films were over, we all headed back to the Scottish Rite Theater for an Awards Party…my first cocktail party! But oh man…that ginger brew…soda, that is, was strong! 😉 LOL! Mind you, I was the only middle-schooler at the party but luckily there was plenty of soda! And some great food too. I especially enjoyed the sushi from How Do You Roll. 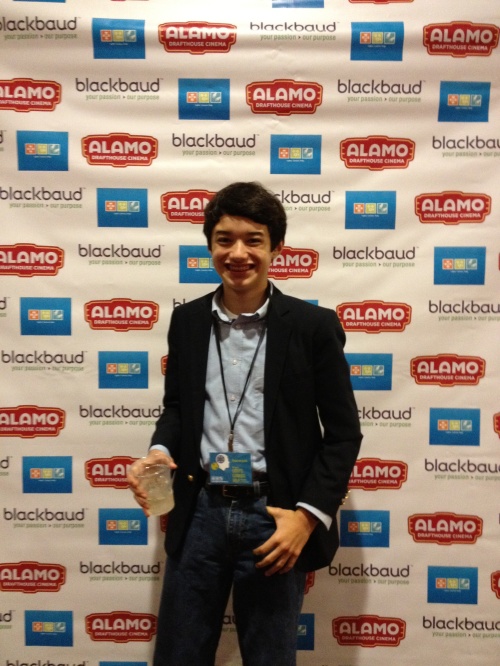 Watch out for the Ginger Brew!

At the party I had the chance to talk with a lot of great film makers who shared some wonderful advice with me about film making and acting. Once everyone had plenty to eat, we all settled into the theater where the winners of the Film Festival were announced.

Congratulations to the winners of the 2012 “Lights. Camera. Help.” Film Festival:

Thanks to all the great festival sponsors, including the Alamo Drafthouse Cinema and blackbaud. (Their logos were on the cool “photo wall” that we used as a background for photos!)

Best Ever Film Festival and Many Thanks

Once again, I want to extend many thanks to all the great people at “Lights. Camera. Help.” including Rich Vasquez, President and Chairman of the Board, David. J. Neff, CEO, and Aaron Bramley, COO, as well as all the volunteers who helped to make the festival such a great experience for all! 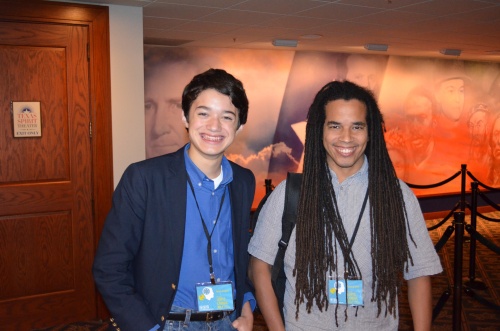 And a huge EXTRA THANK YOU to Mr. Bramley for mentioning me during his “Lights. Camera. Help.” interview on KVUE news!

I’m so happy that my video, “Native Plant Avengers”, was selected to be shown at the film festival to entertain and help raise awareness about invasive species and the Lady Bird Johnson Wildflower Center.

If you didn’t get a chance to see it at the festival, here’s the video:

For more information, here are additional posts and pages about the film festival and Native Plant Avengers:

And even more (!) posts about Native Plant Avengers:

Thanks Texas Bluebonnet, Bitterweed, Indian Paintbrush…and yes, even Bastard Cabbage…for helping me make this great video to entertain kids of all ages about Texas Wildflowers and invasive species!

Commander Ben on stage at the Spirit of Texas Theater during the Q&A after the premiere of his video Native Plant Avengers at the “Lights. Camera. Help.” Focus on Good Film Festival.

Yesterday was amazing for me as I attended my first ever film festival…“Lights. Camera. Help.”…and saw my video, Native Plant Avengers, premiere on the big screen at the Spirit of Texas Theater at the Bob Bullock Texas State History Museum.  And when my video was finished, the audience clapped!  I was so happy.

It was such a fantastic night where I had the opportunity to meet so many great people who made me feel very welcome and gave me lots of encouragement to continue to pursue my film making.  I especially want to thank all the wonderful folks from “Lights. Camera. Help.” including Aaron Bramley, Chief Operations Officer, David J. Neff, CEO, and Rich Vazquez, President and Chairman of the Board.

After the films were viewed by the audience, Aaron Bramley asked the film makers to come up on to the stage for a question and answer session.   It was such an exciting experience to have people from the audience asking me about my film!

I also had the opportunity to see Brandy Amstel again…the woman I first met when we were interviewed together by Robert Sims on his radio show, Lights, Camera, Austin, on KOOP, 97.1 FM.  (You can listen to the interview here.)  Brandy’s film, In Her Shoes, was so moving about a woman named, Betty, who had everything, then lost it and became homeless.  But there is a happy ending.  Betty, through the help of some amazing organizations including Mobil Loaves & Fishes, Dress for Success, and Goodwill, among others, allowed her to get back on her feet…and she even went on to coordinate the “In Her Shoes” shoe drive to collect and provide shoes for homeless women.

And I don’t want to forget…To kick-off the evening there was lots of great food and beverages served before the film screening.  I was a bit nervous and drank a lot of Ginger Ale and Sprite!  Then enjoyed all sorts of tasty hors d’oeuvres and delicious desserts!

In case you missed the first night of the film festival, it’s not too late to join in the fun.  It continues tonight and Friday night.  You can learn more and buy tickets here. 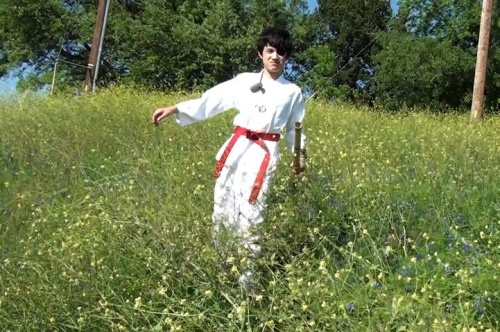 Just a quick reminder that the 4th Annual “Lights. Camera. Help.” Focus on Good Film Festival begins tonight!  As I shared with you in my post last month, my Native Plant Avengers – Ecosystem’s Mightiest Heroes video was selected to be part of the film festival.  My video, along with other videos focusing on good causes, will be shown on the Big Screen(!) to a live audience tonight beginning at 7:00pm in the Spirit of Texas Theater at the Bob Bullock Texas State History Museum.

The winner of the film festival will be announced at 7:30pm on Friday, September 14, 2012, at their awards party at the Scottish Rite Theater.  If I win, I’ve asked to donate my proceeds to one of my favorite organizations whose hard work fighting invasive species everyday keeps native plants going strong in central Texas…The Lady Bird Johnson Wildflower Center!

For more information about the film festival, check out my recent post where I share about my interview by Robert Sims on his radio show Lights, Camera, Austin aired on  KOOP, 97.1 FM.

If you’d like to join me at the “Lights. Camera. Help.” Focus on Good Film Festival, you can view the three day schedule and buy tickets here.  Hope you’ll come out and support a great cause!