Last week, I had a great time at Dr. Andrew Howell’s Hot Science – Cool Talk, Dark Energy, Explosions, and Zombie Stars:  The Past and Future of Our Universe.

Here I am after all the fun activities before the talk:

Let me tell you about them.

For my first activity, I made a moon lander at one of the stations.  I started out with cardboard, cotton balls, paper, straws, and lots of tape.  I also had two big marshmallows, which represented my astronauts.

I had to build a moon lander that would safely transport my astronauts to the ground.  My lander could not tip over, and I could not cover the top part where my astronauts were cowering.

After I built the lander, I dropped it from shoulder height.  It landed straight up and no astronauts were tossed out to their doom, so that’s was good.

Then I went to test it halfway up the nearby stairs.  At that height, I was scared that it would fall to one side, but I was very pleased that it landed straight up.  My astronauts were safe!

It was not so with some of the other astronauts.  Some landers flipped over and astronauts flew out…to their doom.  Some astronauts made it to the ground, but then they were eaten!  I decided to let my astronauts live.

Our other fun activities included making and flying paper airplanes and drawing constellations.  There was also a trivia table where we could get stars for answering questions like:

I’m learning about chemistry in my science class this semester, so these questions were a lot of fun.

There were a lot of groups helping out with fun activities before Dr. Howell’s talk, including the Austin Planetarium.  (They’re hoping to build one soon!)

Here I am near their solar system exhibit: 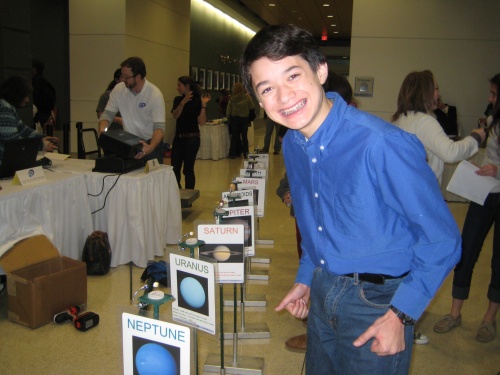 Dr. Howell’s talk was held in a different location than the other Hot Science presentations.  This talk was in the Student Activity Center Auditorium.  It’s a more modern building with fancier equipment, which was neat, but I still like the Welch Hall Auditorium.  Welch has a huge periodic table of the elements on its walls!

Here’s a picture of the Student Activity Center Auditorium before Dr. Howell’s talk:

There was also a Central Texas Model United Nations 2012 assembly going on in the building with high schoolers from across the state.  I met some students who were representing China as their nation, and from the UN program guide, I saw that St. Michael’s Academy and Westwood High School from Austin were also participating.  Cool!

And Now on to Dark Energy and Beyond!

Dr. Howell’s talk was awesome, and it was standing room only!  He showed a lot of cool clips from his National Geographic Channel TV series, “Known Universe”, including simulated explosions of a supernova using a large, gas filled balloon in an open area.  Dr. Howell set it off nearby with a trigger, and he said that even he was startled by how powerful it was.

It was amazing to learn about how when there are two stars nearby and one of the stars collapses into a white dwarf, it can pull energy from its neighboring star.  The collapsed star gets so much energy that it can’t handle it, and it explodes.  Dr. Howell and his astronomy team saw such an explosion from his Las Cumbres Observatory Global Telescope Network.

Dr. Howell had a really long week, working and presenting with the other scientists during the American Astronomical Society Meeting in Austin, but he was great staying long after his talk ended to answer questions from a long, long line of kids.

P.S. If you love learning about the universe, there’s another great Hot Science – Cool Talks presentation later this spring on Friday, April 13, 2012 asking if there’s “Life on Europa?”  I can’t wait to find out!

Although pursued by an invasive species of unknown origin, Commander Ben sends an urgent transmission to Dr. Andrew Howell to get important news and a preview of his upcoming Hot Science – Cool Talk, “Dark Energy, Explosions, and Zombie Stars:  The Past and Future of Our Universe”.

Don’t miss his presentation on Friday, January 13, 2012, 7 pm CT at The University of Texas at Austin in the Student Activity Center Auditorium. Be sure to get there early and join in the fun pre-lecture activities beginning at 5:45.

Dr. Howell is a staff scientist with the Las Cumbres Observatory Global Telescope Network and host of the third season of the National Geographic Channel series “Known Universe.” His talk is part of the awesome Hot Science – Cool Talks series, presented by the UT Austin – Environmental Science Institute.

Learn more about the Hot Science – Cool Talks series, including four great video interviews with Dr. Chris Kirk’s on his presentation, “Your Eye, My Eye, and the Eye of the Aye-Aye”.