Invasive Hunters and Surprises at the Texas Invasive Species Conference

I had such a great time at the 2014 Texas Invasive Plant and Pest Council (TIPPC) conference that was held last month at the UT Austin Marine Science Institute in Port Aransas. I gave my invasive species presentation in the institute’s auditorium, talked with lots of scientists, and received such a great surprise! 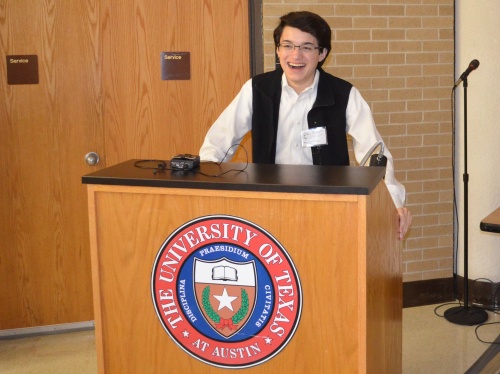 My presentation at this year’s conference was entitled, “Adventures with Invasive Species and the Invasive Hunter Academy”. I talked about how I use social media and my many science videos to educate kids about invasive species. With each of my Battles with Invasive Species videos, I created a character and focused on a specific invasive species that kids could learn from and remember.

For example, you’ve heard of grumpy cat. Here’s my grumpy scientist character who starred in two of my invasive species videos:

Looking for a fun activity for in-person events led me to create the Invasive Hunter Academy, which I described in my presentation. Since I’m dyslexic, I talked about how I wanted to create a multi-sensory approach to helping kids learn through visual matching, physical activities, and creative crafts. I shared my many successes taking the academy to the US Botanic Gardens in Washington D.C. and to many nature events across Texas.

Graduates from the academy have fun, create an action diorama they can bring home, and become official Invasive Hunters!

I fielded many great questions from the audience, including how my videos can be used in school science classrooms. (Please feel free to use them to help kids learn more about invasive species!) I also received a warm invitation from Dr. Linda Brown, Natural Resource Program Manager with the Texas Military Department, to bring my academy to Camp Mabry!

Scientists gathered from across Texas and the nation

There were many great talks from scientists who are helping to research and control invasive species in Texas. Here are just a few of the presentations from some of the scientists that I had a chance to talk with at the 2014 Texas Invasive Plant and Pest Conference and at the 2011 conference. 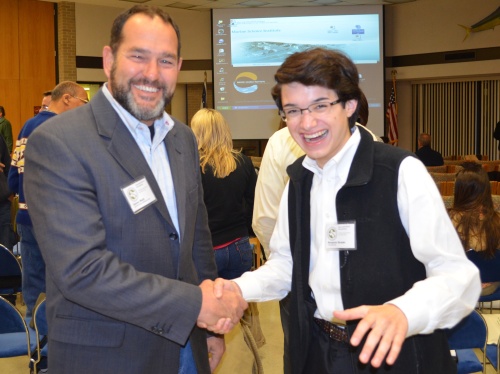 Dr. Damon Waitt and Commander Ben catch a moment together at the Invasive Plant and Pest Conference

At this year’s conference, Dr. Damon Waitt led the Leadership and Coordination sessions and he gave a presentation on The Texas Invasive Plant Inventory and Efforts to Add Plant Species to TDA’s Noxious and Invasive Plant List.

Dr. Waitt is the Senior Director and Botanist at the Lady Bird Johnson Wildflower Center in Austin, Texas, and he talked about the successes and challenges for listing invasive species for inclusion on the State of Texas’ Noxious and Invasive Plants list.

Dr. Waitt talked about two invasive plant species that were added to the state’s list:

Dr. Waitt has been a great mentor to me as I’ve learned about invasive species. Here are a few of my blog posts with Dr. Waitt:

Update on invasive species in Texas

As with the 2011 conference, Dr. Earl W. Chilton gave a wonderful status update on invasive species in Texas with a special focus on aquatic invasives, including the Zebra mussel (Dreissena polymorpha). Dr. Chilton is the Aquatic Habitat Enhancement Program Director for the Texas Parks and Wildlife Department.

Around Central Texas, Dr. Chilton talked about Austin’s successful efforts to bring Hydrilla (Hydrilla verticillata) under control in Lake Austin. He also talked about how scientists found Salt cedar (Tamarix ramosissima) near Lake Travis. Unfortunately, fire ants are attacking the larva of the leaf beetles that have been helping to control the spread of Salt cedar across Texas.

At the last conference when I was just a budding invasive hunter, Dr. Chilton talked with me about Reeling in the Top Aquatic Invasive Species in Texas.

Institute for the Study of Invasive Species 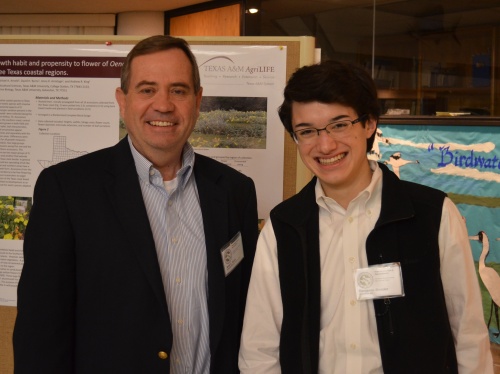 Dr. Jerry Cook is the Associate Vice President for Research at Sam Houston State University. He served as the program chair for this year’s conference, and he talked about the university’s Institute for the Study of Invasive Species (ISIS). He was also part of two presentations at the conference:

I was happy to catch up with Dr. Cook at this year’s conference. I had a chance to create a video interview with him at the 2011 conference to talk about his New Institute for the Study of Invasive Species: Early Detection, Rapid Response.

During the conference and at the evening dinner, I had a great time talking with Mr. Justin Bush, Invasive Species Coordinator for the Lady Bird Johnson Wildflower Center. He has a background working on controlling aquatic and terrestrial invasive species and on habitat restoration projects.

With the Wildflower Center, he works on invasive species projects in Texas and on many parts of the Texas Invasives website, including reviewing pictures and sightings of invasive species uploaded by citizen scientists in their Invasives database.

Mr. Bush helped organize the many workshops for this year’s conference. He was very kind and encouraging, and I’m excited to work with Mr. Bush and the Wildflower Center in the future. 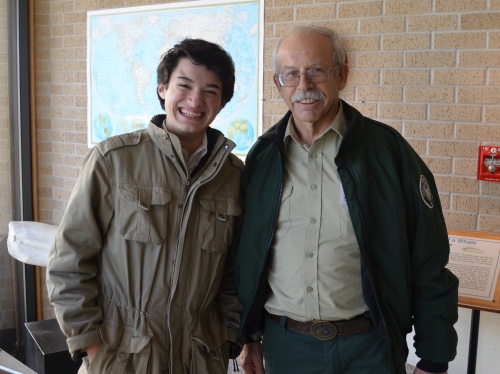 Commander Ben and Dr. Ronald Billings during a break at the invasive species conference

Since I could only attend one day of the conference (since I didn’t want to miss my high school biology class!), I didn’t get a chance to talk with all of the scientists. Here are just a few of the presenters and session chairs with links to videos where I had a chance to interview them during the last 2011 conference.

There were so many great presentations and sessions at the conference that I can’t list them all. Thanks to everyone for the wonderful conference, including everyone I’ve already mentioned, plus Jim Houser, Alex Mathes, Scott Walker, Trey Wyatt, Mike Murphrey, Autumn Smith-Herron, and Sara Pelleteri.

Outstanding Citizen Scientist of the Year

I received such a wonderful surprise at Thursday night’s conference dinner! In addition to receiving a presentation award, the Texas Invasive Plant and Pest Council presented me with the 2014 Outstanding Citizen Scientist of the Year award!

Wow! I was so honored to receive this award and for all the kind words. It was so heartwarming to hear from a scientist that I was “one of the team!”

Thanks, TIPPC, for the award! I’m so happy that my work to help educate kids about invasive species has had an impact, and I’ll continue to train more invasive hunters to help protect and treasure our native ecosystems.

Speaking of the Invasive Hunter Academy, I’m excited to announce that there will be lots of chances for you be part of the academy this spring:

These events are a great chance for kids of all ages to learn about invasive species, have fun with nature, and learn about Texas history. Hope to see you there!