In October 2011, I had a chance to work with biologist Chis Warren and a group of Austin volunteers to help clear out Chinese Privet (Ligustrum sinense) from the Balcones Canyonland Preserve (BCP). I talked about our exploits last year in Titanic Struggle with Chinese Privet Ends with Their Doom.

In August 2012, I returned to the Long Canyon portion of the BCP with volunteers from the Austin Invasive Species Corps to hunt down Chinese Privet plants that were attempting a comeback, such as from the stumps that we cut down earlier or from berries that were buried underground.

It’s important to remove Chinese Privet and other invasive species from the BCP to help protect the native habitat of the endangered Golden-Cheeked Warbler. 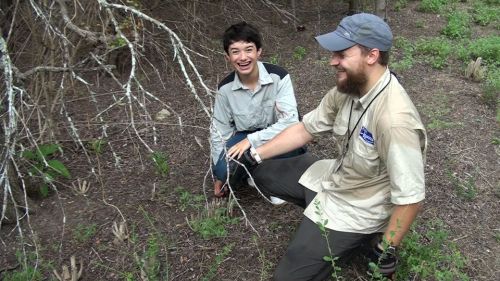 Mr. Warren talked with me about the progress that they made since last year, and in the video from our August 2012 adventures, he describes the Chinese Privet’s distinguishing features. 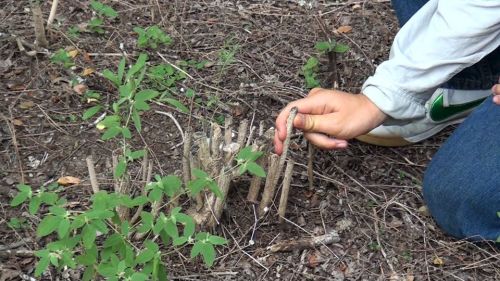 Cut stump of Chinese Privet, an invasive species on the Balcones Canyonland Preserve.

In the video, you’ll also learn why invasive species have a built in advantage over natives, such as cheap, quick growth and the lack of natural predators.

Learn more about my past adventures on the Balcones Canyonlands Preserve:

Would you like the enjoyment…ah…satisfaction of protecting your native ecosystem and pulling an invasive plant out of the ground with a weed wrench or other nature defense weapon of your choice?

On Saturday, September 29th, join Austin Wildlands and the Austin Parks Foundation to help clear invasive species from the BCP and around Austin as part of National Public Lands Day. You can also help to restore Black-capped Vireo habitat in the BCP, help prairie seeding restoration on Water Quality Protection Lands in Northern Hays County, and many other great volunteer activities!

Update: Because of heavy rain expected on September 29, the clean up for National Public Lands Day was postponed to October 6.