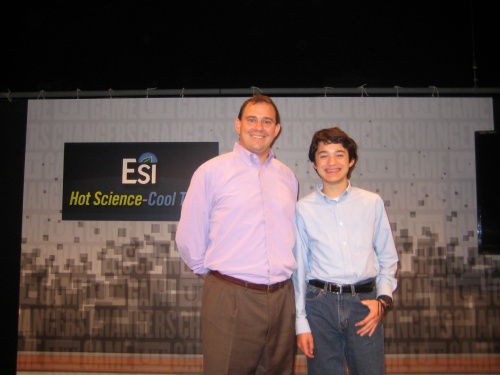 Last month, I had a chance to attend Dr. Michael Webber’s Hot Science – Cool Talks lecture, “From Fracking to the 40 Acres: Energy Challenges for UT, Texas and the World”, in person at the KLRU television studios on the UT Austin campus.

Dr. Webber is the Co-Director of the Clean Energy Incubator at the Austin Technology Incubator, and he is also an Assistant Professor of Mechanical Engineering at UT Austin. KLRU is our Austin, Texas, PBS station where I’ve seen many Nova and Nature television programs.

I missed Dr. Webber’s presentation earlier this year when he gave it as part of the Spring 2012 lecture series, since I was in Washington D.C. getting the Invasive Hunter Academy ready for Kids’ Day during National Invasive Species Awareness Week (NISAW). So I was glad that I got this second chance to see his presentation in person.

The KLRU studio is cool, mostly painted black for the TV background. Someone said that they used to film Austin City Limits, a music program, here.

We could sit in the raised seats or on seats set up on the floor. I wanted to sit in the floor area, as close as I could to the front, so I could see his presentation clearly.

During his presentation he talked about natural gas, wind, and solar as being clean energies for the future. He also talked about biofuels, such as corn. The downside is that corn used for fuel can’t be used for food, and that may drive food prices up.

Dr. Webber also talked about fracking where companies drill far down and then sideways. They blast the shale rock and force a sand and liquid solution down to help release the natural gas out of the cracked rocks. They make a protective covering around the tube to try to keep fluids from leaching out into the surrounding land or aquifers. Fracking helps us get natural gas from areas where we could not before, and Texas is a great producer of natural gas for clean energy.

If you don’t have the Longhorn Network, watch a replay of his From Fracking to the 40 Acres webcast and Hot Science – Cool Talks presentation.

I can’t wait to attend the Fall 2012 Hot Science – Cool Talks in person. They’ll be in the new Student Activity Center.

I liked them in Welch Hall because it felt very scientific, and I really liked the periodic tables on the wall, but having them in the center is hip too. That’s where
Dr. Andrew Howell gave his Hot Science – Cool Talks lecture in January.