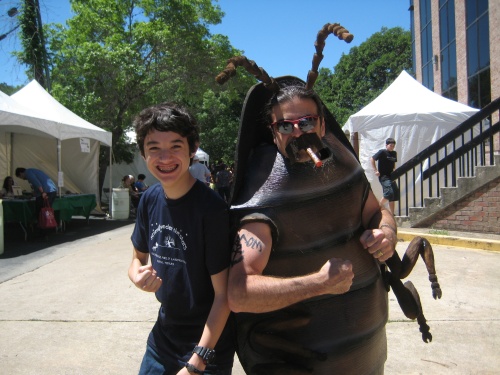 I had a great time learning about insects last weekend at the Insecta Fiesta. It was held on Saturday, April 21, 2012, at the UT Austin Brackenridge Field Lab.

You can see from the picture above that this place had a big bug problem, but that’s a good thing. (Although you can’t see it in this picture, I kept my swatter close by in case this gigantic cockroach got out of hand.) 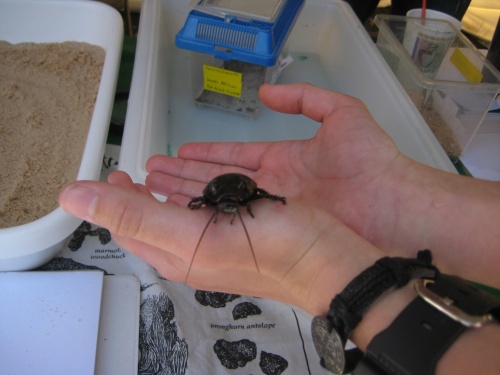 This hissing cockroach was down to size. It was cool holding him because it felt like many dull thumbtacks poking me.

Strangely, it did not hiss for me. I think it was tired of hissing at all the people that came before me. When I put him (it?) back down, it skittered away.

Here I sit next to a homemade bug city in their butterfly garden. It’s really a refuge that everyone can make because there are many places for bugs to hide and burrow in with no fear of being squished. 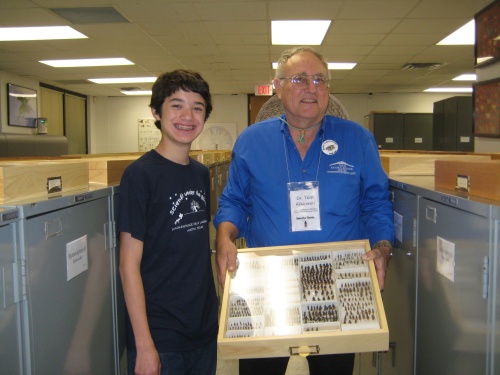 Dr. Tom Atkinson, research scientist with College of Natural Sciences, took us on a tour of the UT Austin Insect Collection. He was really nice and showed us their extensive collection. Although it’s not as big as Texas A&Ms, he said they’re not trying to have the biggest collection (although they have a lot!), but they are trying to specialize in the insects of this area. 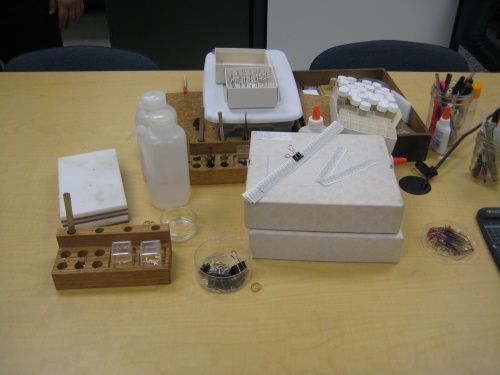 They have wonderful tools for preserving and pinning insects at their field lab.

I love collecting insects, although I have not formally pinned many of the insects in my collection. After they’ve dried out, I keep my specimens in a plastic box with dividers.

Some of my favorites, I put in small, clear card boxes, and I keep my specimens safe by putting cotton balls around them.

Here’s my “pièce de résistance“, an Ironclad Beetle that I found hanging on a screen door a few years ago. It has an extremely hard exoskeleton, and I learned that you have to use a small drill to pierce the exoskeleton, if you want to pin it. I like keeping it on a wall in my room.

I have many more insects in my collection, but four more that I really like are my: 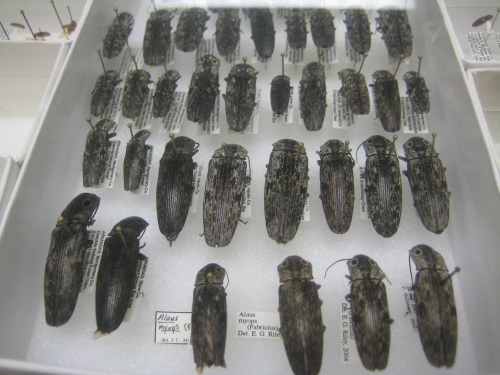 Here’s a picture of UT Austin’s click beetle collection. They are really cool because when you try to hold or catch them, they try to get away by clicking and hopping their bodies, almost like a seesaw. They feed on organic material and roots, and you’ll find them in central Texas, so be sure to look for them the next time you’re hunting insects.

Dr. Atkinson showed us a beautiful display of butterflies, but sadly, he said it was not very scientifically useful because the insects were not labeled or identified. Be sure to label the insects in your collection!

He said that everyone can catch the larger bugs, and they have tons in their collection. (Note to graduate students, collect more smaller insects!)

Beware of food with insects!

They had tons of different insect food to taste, and a lot were made with crickets. I think that people are more open to eating crickets and not mealworms, especially live ones, as that can make you squeamish. (Take a look at me eating a mealworm at Explore UT.)

They were sold out of the following when I stopped by:

The graduate student who I talked with (and who I met at Explore UT too!) said that the least favorite snacks were the ones where people could see the insects. She said that the critter popcorn crunch, which was caramel popcorn with caramelized beetle larva, was not selling well, probably because it was too easy to see the larva. (I didn’t want it either.)

But that didn’t stop me from taking part in the cricket spitting contest. At the front of the line, where people were waiting to spit crickets, someone held a container full of crickets that had been frozen, but were thawed out.

I grabbed one of the crickets with my hand, and I was initially wary of putting one in my mouth, but I finally stuffed it in (and went back for a second time too.) I think I made it up to 13 or 14 feet both times without anyone getting hit.

They started out with 1000 crickets, but the activity was so popular that they soon began to run out. 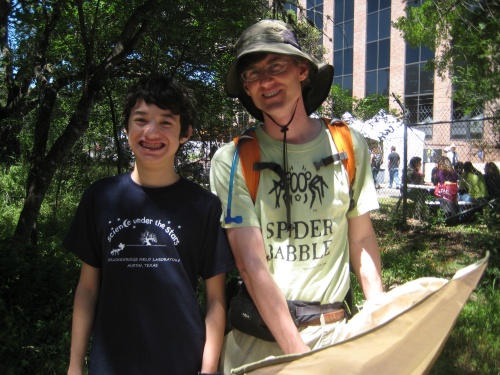 Here I stand with a very nice man, Spider Joe (Joe Lapp). He didn’t like spiders, but preferred insects when he was younger. But he grew to like them and became very knowledgeable about them.

He talked about spiders to our group and asked what’s the difference between insects and spiders? The other kids had a lot of answers, like six or eight legs, but the key answer is that an insect has three body segments: head, thorax, and abdomen. Spiders only have a head and abdomen. 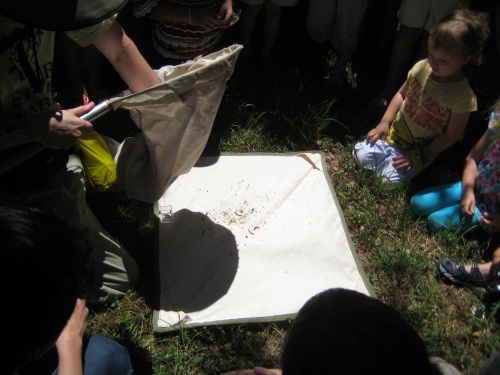 As part of his activity, he walked around through the tall grass with his spider collecting net. He dumped the insects and spiders that he caught on his inspecting canvas. He identified the arachnids that he caught and passed them around in small containers for everyone to see. He mostly caught orb weavers, like Charlotte in Charlotte’s Web. He also found a wolf spider that I liked because it has a cool way of hunting prey. (They don’t wait for the prey to come to them.)

He also showed us a brown recluse in a clear container. It was small and difficult to see, but I was able to make out a fiddle on its back.

Our group walked along a wilderness trail around Brackenridge Field Lab, and Spider Joe stopped along the way to have us look for spiders. In such a wonderfully wooded area, there were a good many spiders. That was a very fun activity. No tarantulas sadly, as I really like tarantulas.

Spider Joe was a really nice man, and if you ever get a chance to get a guided tour from him, jump at the chance.

Here I stand by their experimental gardens. Who knows what secret and mysterious creatures are inside! (I took a peek, but it looks like a bunch of plants…hey…wait a minute, was that an invasive?)

I really enjoyed the Insecta Fiesta. The professors and graduate students at the Brackenridge Field Lab did a great job. It was wonderful to be around so many bugs and so many people who loved nature so much.