Trash and Treasure at the Lake Travis Underwater and Shoreline Cleanup

Volunteer divers hauling up trash from Lake Travis (Is that part of a house?)

I had a chance to be part of the Lake Travis Underwater and Shoreline Cleanup event earlier this month, and you’d be surprised what the cleanup volunteers found!

Ms. Sarah Richards, Executive Director, and Mr. Geoff Hensgen, Program Director, of the Colorado River Alliance invited me to be part of the press boat for the event, and what an exciting honor it was! 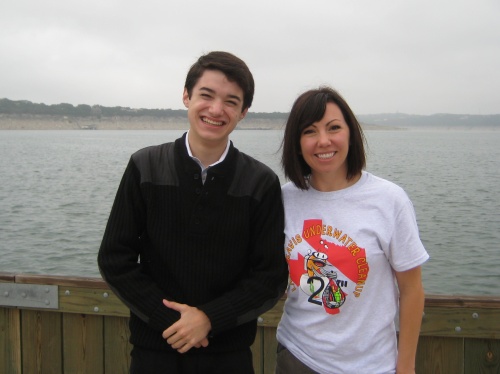 Commander Ben and Sarah Richards on the marina dock getting ready to board the press boat.

Our press boat left early in the morning from a nearby marina and traveled to Starnes Island on Lake Travis, where scuba divers were hauling up trash from underwater and storing the trash in orange nylon bags. It was surprisingly cool in the morning. We had rain and colder weather (for September in Texas!) leading up to the event, and volunteers said it was one of the cooler cleanups that they remembered being part of.

Volunteers met for the clean up at different spots around Lake Travis, including shoreline clean up sites near Pace Bend and Tom Hughes Parks and dive locations near Arkansas Park and Cypress Creek Cove. Approximately 1000 shoreline volunteers and scuba divers took part in this event. Wow!

The divers could see about 15 feet below the surface of the water, and with the low water levels because of the Texas drought, they were able to find trash at depths that would normally be harder to see in. 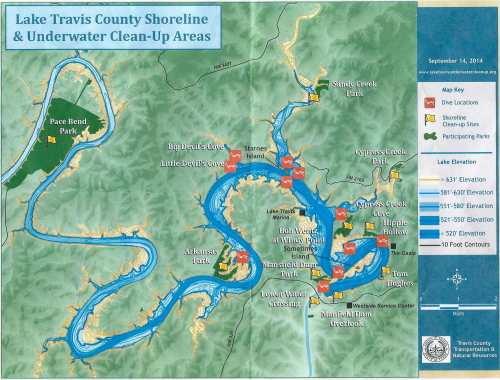 At the intersection of a inlet to Sandy Creek Park from Lake Travis, Starnes Island is only accessible by boat, and it was a critical clean up site since many party boats dock near this island and throw their trash overboard (ugh!). The scuba divers brought up bags and bags of trash, and boats would bring the trash over to the Lake Travis Marina where it was collected and hauled away for proper disposal. 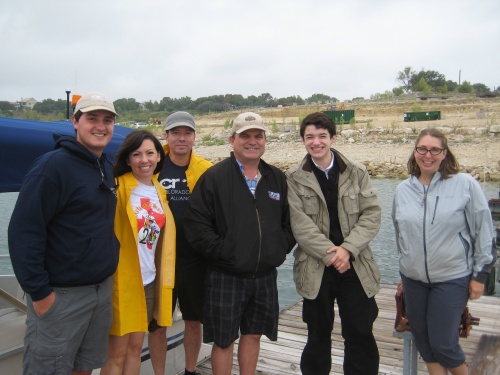 I talked with Ms. Shaun Marie Auckland, Conservation Coordinator for Travis County Parks, who said Travis County became involved in 1994 to provide volunteers with access to the parks and to help scuba divers dispose of trash with trash barges.

Packed volunteer event at the Oasis

The Lake Travis Cleanup volunteer party at the Oasis was packed!

After the clean up, the volunteers celebrated with food, drinks, and door prizes at the Oasis restaurant overlooking Lake Travis. There were many educational booths for kids of all ages about Lake Travis, the aquatic food chain, water quality, and more.

Some of the Colorado River Alliance educational materials 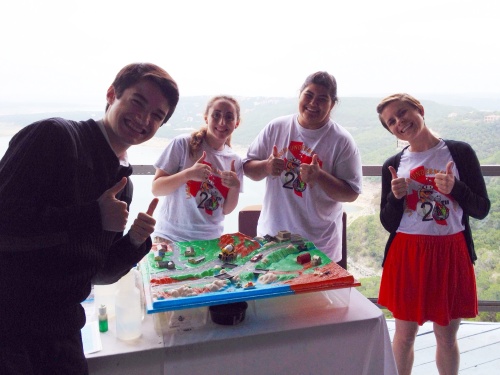 I enjoyed hamburgers, chips, and iced tea with volunteers at the party after the event, and I sat with volunteers who were cleaning up around the low water crossing below Mansfield Dam.

From volunteer Dean Woodley, I learned that the concrete structures on the Sometimes Islands were part of the materials that were used to build Mansfield Dam. The blocks were likely the base of tall pulleys that were used to haul material down to the dam. (I wonder if they were like Archimedes’ pulleys that I’m learning about in my World History high school class.) 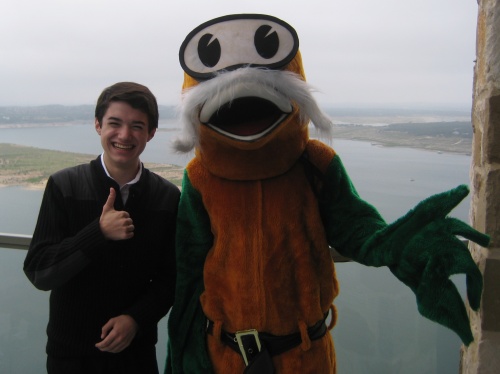 During the volunteer party, the event organizers showed some of the unusual items the volunteers brought in, including sunglasses and a pink flamingo. I heard that someone also found an iPhone (not working – no surprise), and at a past event, they even found an old car motor. 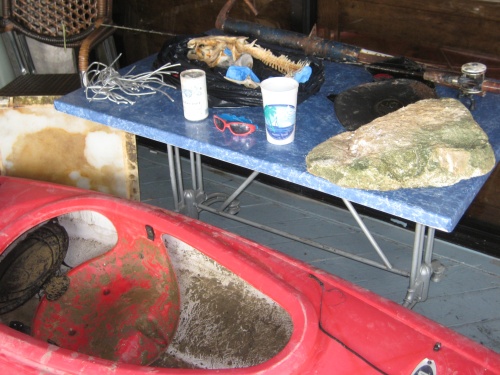 Some of the unusual underwater Lake Travis Cleanup items found (is that a catfish skeleton?)

Some of the unique objects found by Lake Travis Cleanup volunteers

For this year’s event, they announced the winner of the most unusual clean up item: a plastic bottle with a note in it. The note was a reward for a missing wedding ring. Hope someone found it!

TV coverage of the event 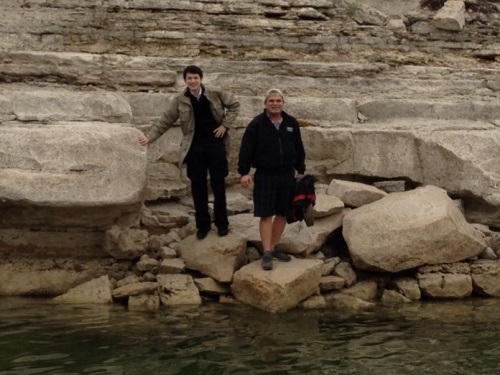 Getting ready to hop back on the press boat from Starnes Island with KVUE cameraman J.P.

As part of our press boat, I met J.P., a friendly cameraman from KVUE who shared his experiences filming many events around Austin. I also saw the KTBC camera crew covering the event during the after party at the Oasis.

During the school year, the Colorado River Alliance has educational activities for primary and middle schoolers. Kids in grades 3-5 can take field trips to LCRA building near Red Bud Island on Lady Bird Lake for hands-on activities to learn about water, wetlands, geography, and more.

The Colorado River Alliance also created the Bringing the River to Our Schools mobile museum to give 7th graders a high quality STEM experience and to educate the next generation of water stewards.

These are great programs for young naturalists and remind me of my science classes. I loved learning about biology in my freshman year in high school. This year, I’m learning about chemistry, and we’re going over the structure of the atom in class right now.

The Lake Travis Underwater and Shoreline Cleanup started in 1994, and on September 14, 2014, celebrated 20 years of helping to clean Lake Travis, a vital water supply for the people and animals of Central Texas. Next year, the 21st annual event will be on September 13, 2015.

Thanks again Ms. Richards and Mr. Hensgen for inviting me to be part of your wonderful event. How great it was to see so many enthusiastic volunteers, both above and below the water, helping to keep our native ecosystem clean! 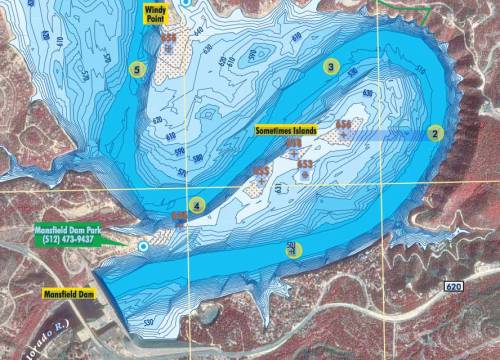 A few years ago, I created a a video about my journey to the Sometimes Islands on Lake Travis, near Austin, Texas. These islands are only visible when the lake waters are low, such as during the terrible drought that we’ve been having. You shouldn’t be able to walk to these islands from Mansfield Dam Park, but I did.

How has the Lake Travis water level changed?

Lake Travis is considered full at 681 feet above sea level. Here are the historic high and low lake water levels:

Water level when I made the Terrible Texas Drought Reveals Sometimes Islands on Lake Travis video:

Wow! The water level is -3.55 feet lower now than when I made my video in the fall of 2011. We rely on Lake Travis for our drinking water in Central Texas, and the lake is only 33% full!

The lower lake levels reveal a lot about Lake Travis, including tree stumps from submerged forests and structures that used to be hidden underwater. I also saw a lot of pioneer plants that started growing on the islands. Unfortunately, I saw a lot of trash too.

Thankfully, the Colorado River Alliance, Keep Austin Beautiful, and Travis County Parks have been organizing volunteers for 20 years to help clean up Lake Travis, both above and below the water.

Their Lake Travis Underwater and Shoreline Cleanup 2014 event is tomorrow, Sunday, September 14, 2014, and there’s still time to register to be an underwater or shoreline volunteer at the Keep Austin Beautiful website.

You’ll make a difference to our native ecosystem (an average of 5 tons of trash are cleaned up each year!) and they have a fantastic Thank You party with free t-shirts, food, and door prizes at the Oasis afterwards. It’s a great event for all ages!