This spring I was honored to be invited to bring my Invasive Hunter Academy to 2014 American Heroes Days at Camp Mabry in Austin, Texas.

This special weekend included the Muster Days event, and the academy was part of the Texas environmental section with activities and booths for kids and attendees. In addition to the Texas ecosystem activities, there were lots of military displays and reenactments, including a WWII battle.

Here are some pictures from the event:

I always enjoy teaching kids about Texas invasive species through the Invasive Hunter Academy’s fun activities. This was the third academy event that I held this spring, including taking the academy on the road to Austin school kids for Earth Day at St. Edwards University.

Justin Bush, Commander Ben, and Mike Murphrey in front of the Texas A&M Forest Service table. I’m holding my “May the forest be with you” bookmark.

Mr. Bush is a wonderful friend and great speaker. He has traveled across the state giving talks and workshops to train citizen scientists how to spot invasive species. He gave me a bunch of Wildflower Center and invasive species brochures to hand out at my academy events. (Thanks, Justin!) Be sure to sign up for the iWire newsletter to stay in touch with the latest Texas invasive species news.

Mr. Murphrey loves Texas trees, and it shows every time he talked with attendees at the event. He explained how trees are renewable resources and how important they are to our ecosystem and economy. He brought a large cross section of a Texas tree to show everyone the rings, the differences between heartwood and sapwood, and how xylem and phloem moved water and nutrients throughout the tree. (I learned a lot about plants in my high school freshman biology class.)

Commander Ben visiting with the Austin Zoo at Camp Mabry 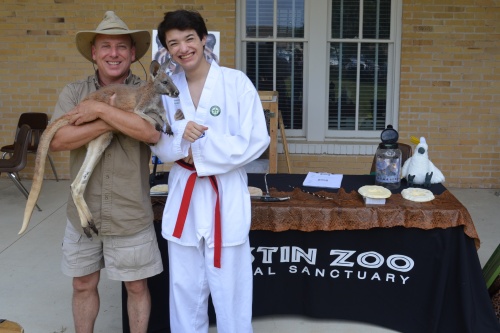 Safari Greg with the Austin Zoo brought a lot of animals, including an adorable tortoise and this cute baby kangaroo, to show kids on Sunday. The Austin Zoo helps many animals in need, rescuing and rehabilitating them. I had fun visiting their southwest Austin location when I was younger.

Notice those large colored rocks to help hold down the papers in the Army Earth Day booth in case of wind. That’s a great idea! I used large binder clips to help keep my academy materials from blowing away during the 2014 Milam County Nature festival. 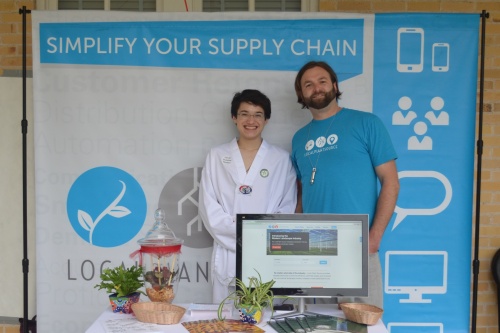 Did you know you can fish at Camp Mabry? I didn’t, but it’s true! 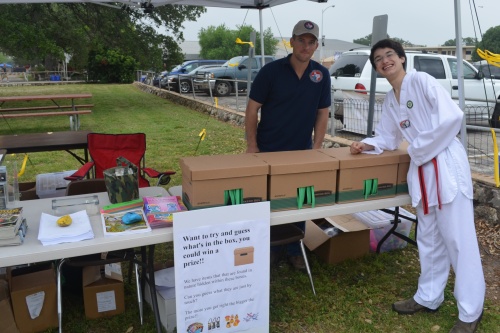 Texas Military Forces: The Power of Partnerships.
What an honor to be listed with a lot of great nature organizations!

You never know who might helicopter in during Muster Days

Where did that Sherman Tank go? It was here just a minute ago.

The Sherman Tank that I took a picture with at the Texas Military Forces Museum was gone! But it wasn’t MIA. Instead, it was leading the charge during the WWII battle reenactment during Muster Days at Camp Mabry. The Axis powers were no match!

I really love dogs, so it was great to find a booth for the canine corps and the police force dogs. These dogs are great because they can enter buildings to quickly find threats or hostages. They really help to protect our soldiers, and I got a neat t-shirt from them.

Dr. Linda Brown and Commander Ben in front of the Invasive Hunter Academy at Camp Mabry

My thanks to Dr. Linda Brown, Natural Resource Program Manager with the Texas Military Department, for inviting me to the event. I met Dr. Brown during the 2014 Texas Invasive Plant and Pest conference in Port Aransas earlier this year.

Dr. Brown made me feel at home, and we talked about our wonderful Texas ecosystem and how I’ve enjoyed visiting Camp Mabry and attending previous Muster Days since I was a young naturalist. (I guess I still am, but a little older than before!) 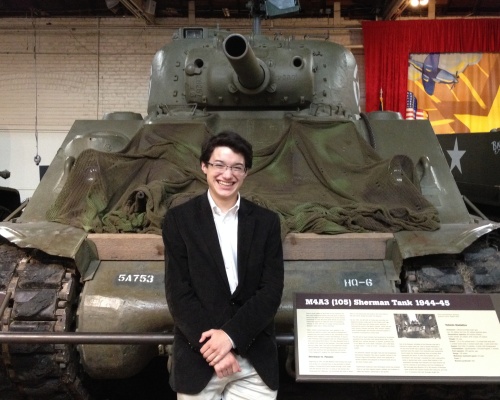 Calling all Austin Invasive Hunters! Your native ecosystem needs you!

Join me this weekend (April 26-27) in Austin, Texas, during Camp Mabry’s 2014 American Heroes Days, which includes the Muster Days event and the Texas Military Forces Museum open house. This event traces its roots back to the days when Texas was still a republic and troops were “mustered” or called to report.

During American Heroes Days you’ll meet reenactors from all periods of Texas history and get to know their historical uniforms and equipment.

On both Saturday and Sunday at 2pm, you won’t want to miss the WWII battle reenactment, where you’ll find out about the troops and tactics that were used. I’ve been to these reenactments when I was younger and they are amazing!

My thanks to Dr. Linda Brown, Natural Resource Program Manager, for inviting me to bring my Invasive Hunter Academy to be part of event’s environmental section, focusing on Texas’ native species and cultural heritage. In addition to learning about our American heroes at Camp Mabry, young naturalists can also learn about invasive species and become official Invasive Hunters!

Parents and adults won’t want to miss talking with Mr. Justin Bush, Invasive Species Coordinator for the Lady Bird Johnson Wildflower Center. He’ll also have a table to talk about the ways that you can treasure our native Texas plants and protect our native ecosystem.

This weekend’s going to be action packed!

I’ve brought the Invasive Hunter Academy to so many great events these last few weeks, that I haven’t had a chance to talk about them with you.

Look for my posts in the coming weeks where I share some of my experiences working with young naturalists and the Invasive Hunter Academy.

Hope to see you this weekend! 🙂