How Percy Jackson Made Dyslexia Cool

To celebrate the release of The Mark of Athena, Rick Riordan’s latest book in his Heroes of Olympus series, I created this short video to give you a fun summary of the Percy Jackson and the Olympians series and the first books in his latest series.

I’m looking forward to listening to the audio version, and if you’re dyslexic, as part of my video, I also talk about how you can enjoy these books too, whether your mom reads them to you or whether Learning Ally reads them to you. 🙂 You can also listen to the audio CDs from your public library.

Percy Jackson is a dyslexic who has extraordinary powers, and in addition to being a demigod, he’s a really nice guy. He made me feel better about myself, because he’s a dyslexic who is also a hero!

One of the greatest Percy Jackson moments for me was when I told a friend recently that “I have dyslexia”, and she said, “Oh, like Percy Jackson!” Thanks to Percy Jackson and Rick Riordian, dyslexia became something really cool. Instead of the guy who had problems reading, you were a demigod. 🙂 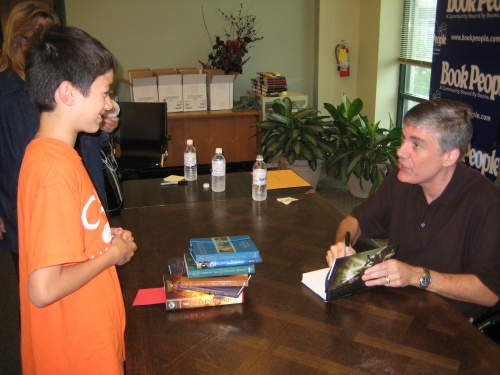 If you’re in Austin, Texas, be sure to stop by BookPeople on October 8, to be part of the parking lot celebration of Rick Riordan’s latest book, The Mark of Athena. You can enjoy the fun games and activities and pick up a signed copy of the book.

I’ve been to past book releases at Book People, and they’re a lot of fun! In the picture above, I picked up a Camp Half-Blood t-shirt at the The Red Pyramid book signing.

And during the release party of The Lost Hero, Mr. Riordan said that he would like to also write a book series with Norse Mythology, but at the time, he was busy writing his Greek/Roman and Egyptian series. If he starts writing the Norse series, it would be really cool to see how Odin, Thor, and Loki are portrayed. Will they be similar to what we’re used to, or will they be really different?

It’ll be fun to find out!

Update: Watch a video of the Mark of Athena event

One response to “How Percy Jackson Made Dyslexia Cool”