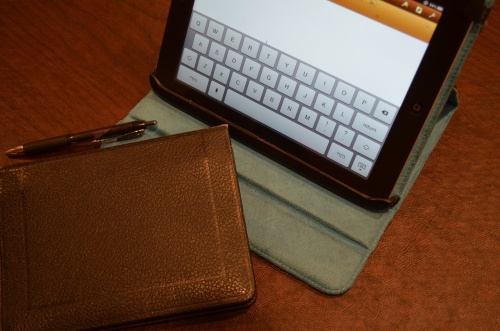 My Notebook, Pen, and iPad

It may seem funny to talk about technology in one breath and then mention pen and paper in the other, but they really can work together. For most everything I do, I use some form of technology – my Victor Reader Stream, a laptop, an iPad or an iPhone – but sometimes , well almost daily actually, I still enjoy writing something down into my old-fashioned journal.

My journal is a small leather three-ring binder with lined paper which is actually three generations old. I found it tucked away in my dresser draw in my room where my Mom had saved it for me. She used it as a kid and her Mom used it before her.  I think that fact that it was old and looked different than other notebooks was part of it’s appeal.  Even though I am a 21st century kid, I like old-fashioned things.

Handwriting and Spelling – Always a Challenge

Mind you, this was not something I took to immediately. Having dyslexia, compounded with dysgraphia, has always made handwriting and spelling very challenging for me. But I loved the idea of having a private journal where I could scribble (literally!) my secret notes. I think it started around the time I read (thank you Learning Ally!) the first book in The 39 Clues Series.

I was jotting down “clues” in my journal, ripping them out, and hiding them around the house. (My parents are still finding them and that was a few years ago!)  They were far from perfect, often misspelled notes, usually with a hand sketched picture for clarification, but suddenly writing was fun and not a chore.

My early attempts at writing – a “Clue” from The 39 Clues.

How Technology Can Help

But where my writing style differs from most kids, is that I use a combination of paper, pen…and technology to jot down my thoughts.  If I’m at home, I’ll prop the iPad in front of me as I write in my journal.  I start to write, and as I think of a word that I don’t know how to spell, I use the iPad Dictation Mode to record it.  The word will pop up on the screen and then I’ll use the text reader to read it back to me to make sure it’s the right word that I want to use.  If it is, then I copy it into my journal.

Here I am getting ready to write in my journal with the iPad ready to help.

The reason that I have the iPad read the word back to me is because  – although it’s a great tool – it’s not perfect.  Sometimes I might dictate a word, but the iPad hears it slightly differently and puts a different word on the screen…but I can’t always read it well enough to tell the difference.  Having the iPad read it back to me lets me know that the iPad understood me correctly and I am copying the right word that I want to use.

Write or Right?  Which One Is it?  How “ing” came to the rescue.

Oh!  But this just made me think of something important.  What about words that sound the same but are spelled differently such as “write” and “right”! How does the iPad know what to “write” so that I use the “right” word.  Well, it doesn’t.  But that’s OK.  Let me explain.

I may not know that the spelling of a same sounding word with different meanings might have different spellings, but I make the educated guess that it does, so I usually add “ing” to the word I dictate.  If I say “writing”, the iPad will usually not type out “righting”, (yes, “righting” is a word but it is less common, so the iPad will usually go with the more common word which is usually the word I’m looking for), so I know I have the “right” word to “write”.

The same is true with words like pear and pare.  I would have no idea how to spell either of these, and I wouldn’t even really know that they are spelled differently, but if I use my trick and add “ing” to the word, the iPad will type paring not pearing.  So then I know that the word on my iPad screen means “a pair” and the other is a fruit.  Clever, huh? 😉

But It’s All Worth It

Having to use the iPad to help me write in my journal may be an extra step compared to what other kids might have to do, but I actually find it fun because it gives me the freedom to be able to write down my own thoughts, in my own hand…and without having to call out, “Mom, how do you spell…”

And it’s a much more fun way to practice handwriting than writing the same letter over and over again.  And speaking of practice, keeping my journal has actually helped to improve my handwriting.

And one other thing I would like to share that you might be wondering about.  Why do I use a pen instead of pencil?  Wouldn’t it be easier to erase, if I used a pencil?  Well, that’s true but I like a pen for two reasons.

One, a pen is more scientific.  Scientist always write in pen in their scientific notebooks for the very reason that it can’t be erased.

And second, I simply like the weight of a pen – preferably a substantial, thick, heavy weighted pen as opposed to a light weight pencil.  It just makes writing easier for me.  I thought it was just me, but I learned that people with dyslexia often do finding writing easier when their writing instrument of choice is weighted.

So if you struggle with handwriting like me, why not try writing in a journal.  You might find it fun.  And your handwriting might improve as well.  I love the fact that I can neatly (relatively!) write my name and phone number on a piece of paper and hand it to a girl proudly! 🙂

Be sure to visit the Dyslexia page of my blog to read my other posts including:

14 responses to “How To Make Paper Journals Dyslexic Friendly”